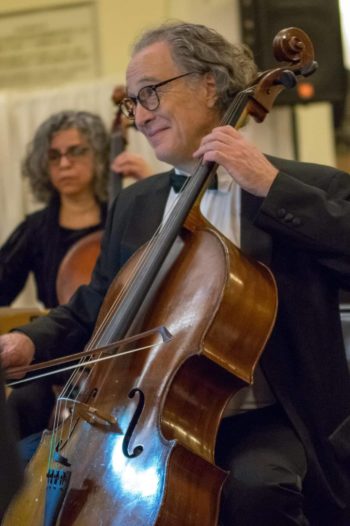 “My impressions after recording a demonstration of the ConCarbo cello tailpiece by Georg Schegolsky.

In making a direct comparison between a standard, widely used composite cello tailpiece by Wittner and the new ConCarbo, I set about to first make such a comparison as directly as possible. The control of parameters of the setup of the instrument and of the recording and performances was done carefully to limit any influence on the outcome. Both tailpieces were carefully installed with precisely the same string length to string afterlength ratio as is commonly accepted by the luthier community of 6:1, and the tailguts were of the same Dupont Kevlar material. The same strings, cello, bow, etc. were used in both setups with no alteration of the soundpost or bridge placements. The same microphones, microphone placement, location of the cello and other objects in the recording environment, microphone preamp, DAC, and signal chain were employed for both recordings. Both performances were intended to be as consistent as possible regarding tempo, dynamics, and interpretive detail so as to limit the impact of those variables on the listener.

My observations as a player, and as a listener to the resulting recording are that the ConCarbo carbon fiber tailpiece provides a clear improvement in the performance of the cello in every respect. The response to the bow is greatly enhanced, as is the clarity and focus of pitches played, particularly in the higher registers on all four strings. There is a greater energy in the fundamental pitch of every note in all registers as well as an enhanced response in the ringing of overtones. The increase in the fundamental frequency seems to increase the power and volume in the lower register most especially, but it is my impression that this quality is also responsible for the enhanced clarity of pitch in the upper registers, as well. Ultimately, these characteristics make the cello more clear, focused, and projected in all dynamics, from the softest to the loudest. The difference is stunning and unmistakable.

Other observations I can share are that there is a significant physical difference between the ConCarbo and all of the commonly used tailpieces with which most cellists are familiar, be they wood, plastic, composite, or metal. The most obvious is weight. The Wittner weighs @67 grams, and the ConCarbo (without tuners) weighs 24.8 grams. Many wood and metal models are much heavier. The ConCarbo is very thin and rigid, and when struck, it rings very much like a bell. The Wittner makes a rather dull sound when struck and is much more dense.

The development of such refined carbon fiber products signals a welcome new avenue for string players to enhance their instruments’ response and utility, and thereby opens new doors to human expression through music. Clay Ruede”

Many thanks to Clay Ruede for the hard work on tailpiece comparison and review.

Cookies
To make this site work properly, we sometimes place small data files called cookies on your device. Most big websites do this too.
Accept